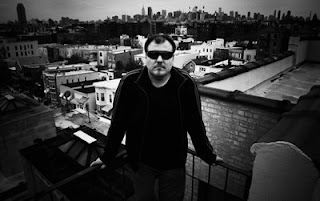 There's been some criticism lately of the recent wave of Basic Channel inspired Dub House and Techno productions popping up all over. Too many copy-cat tracks and not enough originality they say. Being born in South Africa and transplanted to the Big Apple with influences ranging from The Orb, Aphex Twin, Fela Kuti, A Tribe Called Quest, De La Soul, Sonic Youth, Can, Neil Young to Dylan, you can be assured that Brendon Moeller (aka Beat Pharmacy, aka Echologist) is not one of these copy cats. Moeller is mainly known for his dubby house and techno sounds, but his music has a warmth and organic feel and enough variety in ideas, sounds and sometimes even tempo to transcend above the mold. Being the A/R man for Francois K's eclectic Wave family of labels is another clue that Brendon is a versatile man with good taste. Moeller has released music as Beat Pharmacy for the Deep Space branch of these labels (the latest being his recently released dub protest album "Wikkid Times" featuring the likes of Paul St. Hilaire, Spaceape & Infinity on vocals), under his own name for Third Ear, Echochord and Leena, and as Echologist for Tokyo based Mule Musiq. Deep Transmissions caught up with Moeller about his Beat Pharmacy album and some of his influences.


DT - Were you exposed to any dance or electronic music before moving to NYC from South Africa?
BM - Yes. By the time I moved to NYC I was well into bands like the Orb, FSOL, Aphex Twin etc.
What was the transformational process from your initial interest in No Wave music into Dub and Techno?
I think it was hearing how the Orb used dub production styles in their music that really struck a chord with me.
What inspired you to do a protest album?
I was inspired by great protest artists like Bob Dylan, LKJ, Fela Kuti, the Last Poets, Prince Far I and many more.
Did you have creative input for the lyrics or was it up to the artists?
I told the artists the concept behind the record and pretty much gave them the freedom to express themselves.
Any other musician or vocalist you would love to collaborate with?
I would love to collaborate with De La Soul, Elvis Costello, LKJ, Mark E. Smith, Kevin Shields, Einsturzenda Neubauten and Neil Young, to name but a few. :)
I noticed some of the songs in Wikkid Times have a dub step feel, and you've also recently done a remix ep for Appleblim & Peverelist. Have you been keeping an eye on that scene?
There's some seriously talented folks in that scene. I have nothing but respect for the likes of Kode 9, TRG, 2562, Shackleton and quite a few others. Some very forward-thinking people heading up the scene.
On that note, I noticed you used both your name and the Beat Pharmacy moniker on that ep. You've said before the difference was down to label politics, was there a reason for the difference in this case?
I think people are starting to equate my harder techno stuff with Brendon Moeller and the dubbier stuff with Beat Pharmacy, so I'm just going with the flow.
What are some of the things you've learned from working with someone like Francois K who has such a history?
He has taught me so many valuable things about music, the music biz and life. As far as the music goes, his attention to the little details that sometimes make all the difference has really made me evaluate my tracks with a much better sense than before. He has also taught me valuable lessons about DJ'ing.
What's next for Brendon Moeller or one of your various aliases?
I have an Brendon Moeller EP coming out on Apnea in November, a Brendon Moeller EP and album on Third Ear in March 09, a Brendon Moeller 12" on Connaisseur, and an Echologist EP on rekids in 09... lotsa remixes and other goodies too. :)